In the last Executive Committee Members Meeting of Sourashtra Madhya Sabha held in Ayyampettai on 22nd February 2006, it was decided to inform the Commissioner for Linguistic Minorities in India that the Official script for Sourashtra Language is Devanagari. It was announced by the General Secretary Sri E.Santharam that the Asst. Commissioner for Linguistic Minorities, Chennai is the close friend of Sri Venkataramanan of Erode. It is reported by Sri Venkataramanan that if we tell our decision that the official script for Sourashtra language is Devanagari, then things would move fast and grants could be released by Government for the development and teaching of our language in Schools.
Though it was announced that everybody would be given chance to speak on this vital issue, yet many could not get opportunity to tell their views and were disappointed. The decision was announced by the President Sri P.G.M. Thulasiram in haste without discussing in depth the pros and cons of adopting Devanagari script for Sourashtra Language. The role of Educationists was missing.

The names of the persons who talked in the meeting are less important. The contents of their talk are more important.

Posted by UPAMANYUOSS at 8:24 PM No comments:

Posted by UPAMANYUOSS at 6:06 AM No comments:

39th All India Conference of Dravidian Linguists at Patiala.

The 39th All India Conference of Dravidian Linguists was held in Punjabi University, Patiala from 14th June 2011 to 16th June 2011.

It was organised jointly by

I read a paper on 'Comparison of Sourashtra Basic Vocabulary with Marathi'
on 15th June 2011.

The gist is given below:

Sourashtra (Saurashtra) language is an Indo-Aryan Language. Though its origin is in North India, it is now widely spoken in South India, especially in Tamil Nadu. It is a minority language and Sahitya Akademi has recognized it and honoured two Sourashtra Scholars by giving Bhasha Samman Award.

T.M.Rama Rai states that Sourahtra is the modern form of Sauraseni Prakrit.
According to Linguistic Survey of India, Saurashtra is tentatively grouped under Gujarati pending detailed investigation.
Language hand book on mother tongue in Census (Census centenary monograph No.10) (1972) lists Saurashtra as a separate language in Appendix II Mother Tongues - 1971 (Provision figures) page 334 as
Sl.No.68 Saurashtra (total speakers 181,289).
But in 2001 Census, Sourashtra is grouped under Gujarati and is shown as a dialect of Gujarati. It is not known how it has been asserted as a dialect of Gujarati.
Systematic comparative study of this language is to be done with other sister languages like Marathi, Konkani, Khatri etc.
Now in this paper basic vocabulary of 600 words of Sourashtra are compared with Marathi. It is found that out of 600 words, 150 words tally exactly and 111 words tally with slight modification. In toto 261 words i.e. 43% of words can be understood by both people.
It is hoped that Linguists will come forward to compare Sourashtra language with other sister languages. The findings will enable to determine the origin of this language and their original homeland.

O.S.Subramanian,
Life Member of DLA, Thiruvananthapuram.
Posted by UPAMANYUOSS at 3:09 AM 4 comments:

Email ThisBlogThis!Share to TwitterShare to FacebookShare to Pinterest
Labels: Comparison of Sourashtra with Marathi

The population enumeration Census 2011 is going to start on 9th February 2011.
To day the enumerator called on me and requested to keep ready the date of birth of all the residents of my home as she will be visiting again on 9th to record the details of Census 2011. It is learnt from that enumerator that there is no question regarding Caste in the enumeration which is starting from 9th February.

I appeal to all Sourashtrians to record their mother tongue as SOURASHTRA.
Because people were not alert, the population of Sourashtras was much understated/
At least in this census it should be corrected, so that we can claim the rights of Linguistic Minorities.
Posted by UPAMANYUOSS at 9:52 AM 2 comments:

Email ThisBlogThis!Share to TwitterShare to FacebookShare to Pinterest
Labels: Census and Sourashtra Community. 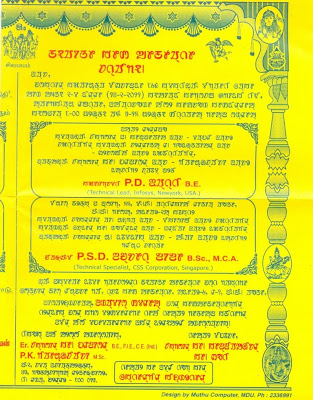 Please view the attached document - a marriage invitation printed in Sourashtra Script.
Er. P.S.Dhanabalan, B.E., FIE, CE(Ind) is an ardent supporter of Sourashtra script.
He has printed the marriage invitation of his daughter in Sourashtra script, besides in Tamil and English language. The marriage date is on Monday, 14th February, 2011. The venue is Agarwal Bhavan1 BB Road, Balarangapuram, Madurai-625009.
Muhurtham between 6 am & 7.15 am. Sow. P.D.Aarti marries Chi. P.S.D.Achyut Babu.
Posted by UPAMANYUOSS at 8:03 AM No comments:

Email ThisBlogThis!Share to TwitterShare to FacebookShare to Pinterest
Labels: Invitation in Sourashtra Script.

In some quarters, it is suggested that Grantha script, a modified form of Tamil script, used to write Sanskrit texts etc. instead of using Devanagari script,
can be used to write Sourashtra language.

Sourashtra language has got a beautiful, scientific, modern, simple and uniform script.
So there is no need to use Grantha script for Sourashtra Language.
Already, the Devanagari script supporters could not do anything for the development of Sourashtra language by using Devanagari Script.
Recently they are trying with Parivarthit Devanagari script !
Even in this script, two more symbols to represent half yakaram and nasal marker are not provided.
It is a pity the supporters of Devanagari Script has not studied the books written by Sri T.M.Rama Rai. Had they studied the books written by T.M.Rama Rai in Sourastra script, they might have realised the need to provide two additional symbols required to write half yakaram and nasal marker which are peculiar to Sourashtra language.

Sourashtra language has special sounds which are not available in other Indian language. Hence, it is not possible to adopt Grantha script for Sourashtra Language.
Posted by UPAMANYUOSS at 10:37 AM No comments: